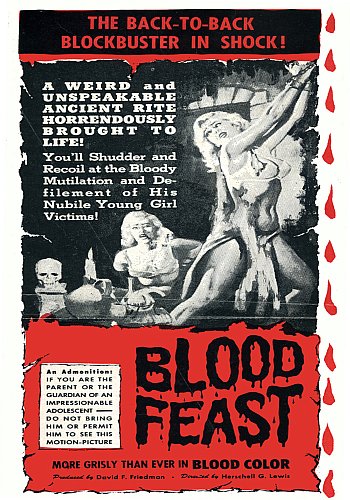 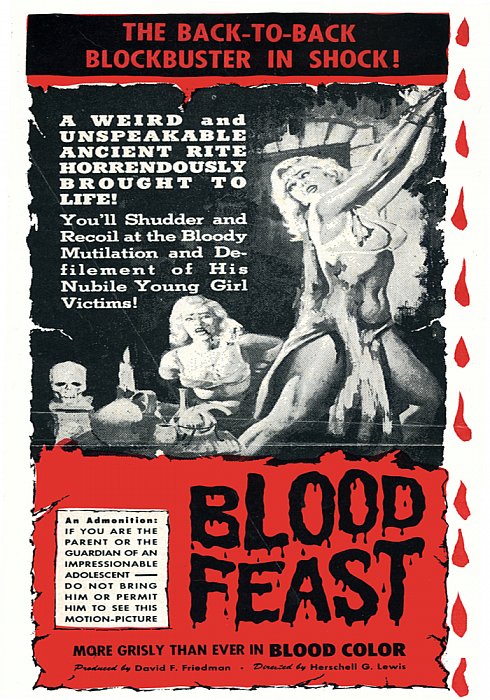 Nothing so Appalling in the Annals of Horror!

Most people think America lost its innocence when JFK was assassinated. Actually, it happened four months earlier when BLOOD FEAST opened at a Peoria, Illinois, drive-in. With its bright colors, bubbly babes, and minimal production values, Blood Feast resembled the average nudie flick. However, the pretty young beauties in Blood Feast didn’t get naked. They got dismembered. Yes, folks, the infamous, notorious, ultra over-the-top Blood Feast is the world’s first "gore" film. Less a horror movie than extreme exploitation, it may even be argued that Blood Feast is the first horror roadshow since 1934’s Maniac.

Shot in five days in Miami for under $25,000, Blood Feast’s simple-minded script and wildly overwrought Amateur Night theatrics also helped transform it into the world’s first gore comedy. Blood Feast is, in fact, simultaneously disgusting and hilarious. It’s as if the local loony bin had made a home movie and got a little carried away with the killings...

SANDRA SINCLAIR is taking a bath when a madman with a machete abruptly borrows one of her legs. The killer, Fuad Ramses (Scum of the Earth’s MAL ARNOLD with painted on, Groucho Marx-like eyebrows), is then hired by Mrs. Fremont (who’s supposed to be affluent but wears thrift store rejects) to cater a party for her daughter, CONNIE MASON ("Playboy’s Favorite Playmate!"). "Have you ever had an Egyptian feast?" Fuad practically spits in her face. Said feast is then prepared with the brains of a gal making out on the beach ("She didn’t have any brains so we had to fake it," is one of Herschell’s famous quotes), a tongue yanked out of the mouth of Miss ASTRID OLSEN (a scene that still grosses out today), as well as assorted other body parts including a leg and two toasted tits cooked in a pizza oven.

Out to stop the culinary crackpot is WILLIAM KERWIN (under his Thomas Wood nom de plume) and SCOTT HALL, who couldn’t remember his lines so reads them off the palm of his hand. Obviously, Blood Feast could only be the brainchild of producer DAVID F. FRIEDMAN and director HERSCHELL GORDON LEWIS. Together, they quickly followed it with Two Thousand Maniacs! and Color Me Blood Red, while Lewis continued to spew cinematic blood and guts with The Gruesome Twosome, Wizard of Gore, and The Gore Gore Girls. Catching everyone by surprise, Blood Feast was an enormous grindhouse hit.

From the original 35mm "More Grisly Than Ever In Blood color!" negative.