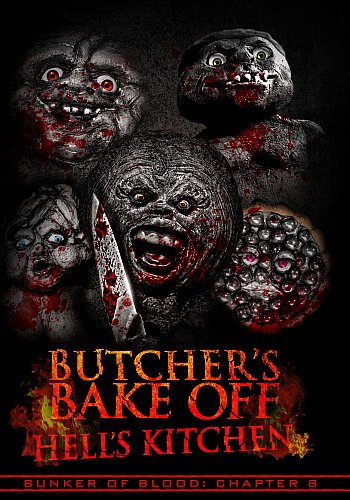 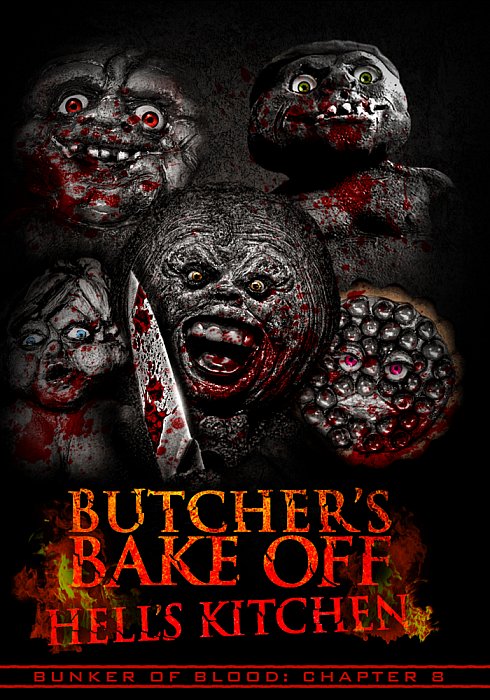 FULL MOON’S BUNKER OF BLOOD takes you out of the frightful frying pan and into the skin-searing fire with its 8th tasty chapter, BUTCHER’S BAKE OFF: HELL’S KITCHEN!

Follow The Gore Collector as his arcane adventures into splatter cinema and through the seventh circle of hell drag him BACK to the bunker, where it all began. Picking up where the previous entry left off, the only surviving member of the Circle of Psycho Surgeons has escaped, and now The Gore Collector, Molly, and Tape Head must chase down the murderous maniac and make him pay for his perversity. But when a series of shocking events reveal the bunker might exist between the very walls of time itself, our gruesome crew must prepare for their transition into the real world.

BUTCHER’S BAKE OFF: HELL’S KITCHEN supports this mind-bending “motion comic” story with a flurry of furious, hard-boiled clips from cuisine and cannabis-centric creature features like THE GINGERDEAD MAN series, GINGERDEAD MAN VS EVIL BONG, EVIL BONG 420 and many more. Get lost in the horrific haze of this, the strangest and sauciest entry in THE BUNKER OF BLOOD yet!