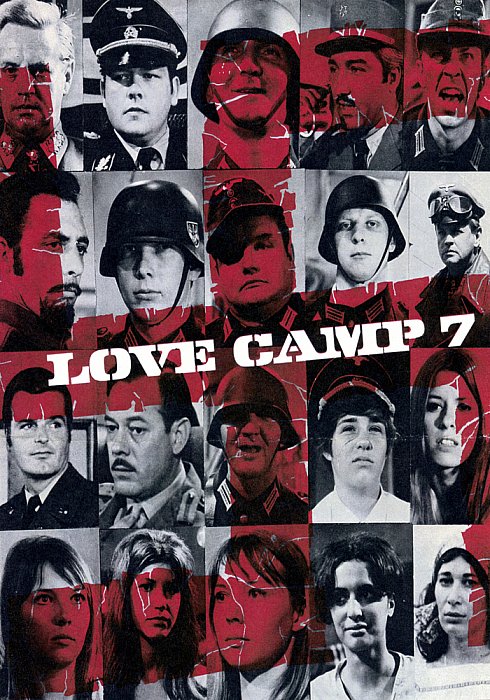 In the world of roughies, there’s "sick," there’s "offensive," and then there’s Love Camp 7. Think of it as a one-stop supermarket for all your misogynistic needs.
During World War II, MARIA LEASE (Fabulous Bastard from Chicago) and KATHY WILLIAMS (Office Love In), two WAC Lieutenants with photographic memories and big breasts, volunteer to infiltrate Love Camp 7, a POW camp where the women are forced into sex with German officers. Once inside, they hope to find a certain prisoner who holds information about a new jet engine, and... oh yeah, "be whores for the Third Reich."

The movie follows two female American officers (played by Maria Lease and Kathy Williams) who volunteer to enter a Nazi camp undercover to gain information from, and possibly rescue, an inmate. The camp's female inmates serve as prostitutes for German officers and are subjected to humiliating treatment, torture, and rape. When the two female agents learn that their target is being held in solitary detention, one of them arranges to be punished so that she can make contact. This leads to Lt. Harman (Lease) being stripped and strung up by her wrists. The target uses her body to free Harman and they attempt their escape. The escape plan ends in a climactic battle.

The movie shows female full frontal nudity for a majority of the film.

You’ll also spot COLLEEN MURPHY (Alice in Acidland), JOHN ALDERMAN (Fabulous Bastard from Chicago) with a semi-French accent, and rotund exploitation vet BRUCE KIMBALL (Drive-In Massacre; billed here as Bruce Kemp) who gets a corkscrew in the neck.  Yes, kiddies, this is the forerunner to all those sick, sick Nazi sex films of the seventies, and no self-respecting Nazploitation collection would be complete without it. Cresse and director R. LEE FROST first flirted with Nazi fetishes for a nasty sequence in 1966’s Mondo Bizarro, while an unbilled Dave Friedman produced the ultimate in Nazi roughies, Ilsa She-Wolf of the SS for Canada’s Cinepix in 1974.

From the original 35mm goose-stepping negative.