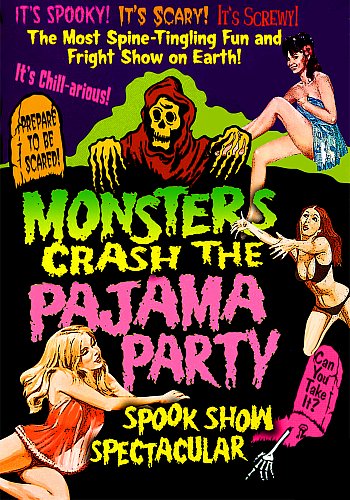 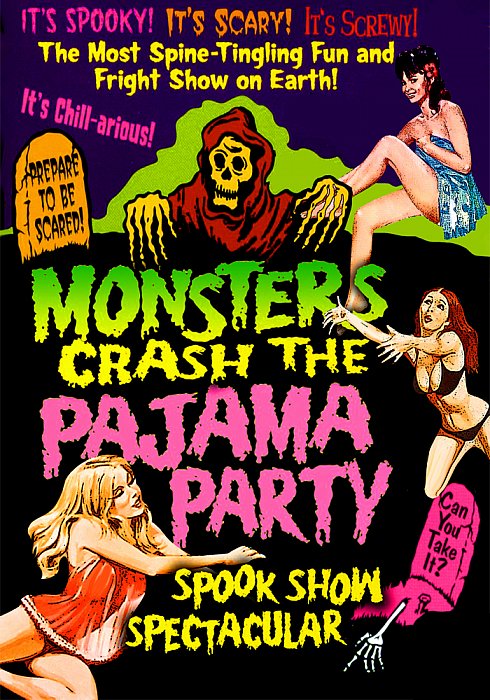 Grab the kids, lower the lights, and turn every night into Halloween with the "MONSTERS CRASH THE PAJAMA PARTY SPOOK SHOW SPECTACULAR!" Get ready to scream, shiver, and shudder as your living room becomes a haunted house - a virtual Chasm of Spasms - that we DARE you to tour from top to bottom! It's a Spookaroo Whoop-de-doo with this Terrorific Spooktacular containing everything you need for your very own Spook Party! Just add screaming.

A group of teenage girls spends the night in an old dark mansion as an initiation into a college sorority. What they don't know is that the building is actually the headquarters for a mad scientist and his hunchbacked assistant, who are experimenting with turning humans into gorillas.

Join some terrified teens when the MONSTERS CRASH THE PAJAMA PARTY, a hilarious 1965 spook show theatrical featurette complete with werewolf, gorilla in a fur coat, and goofy gimmick! Beware, they might get YOU!