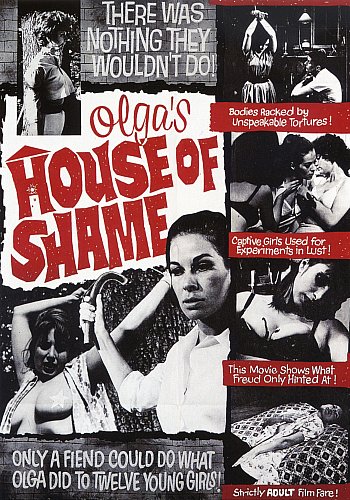 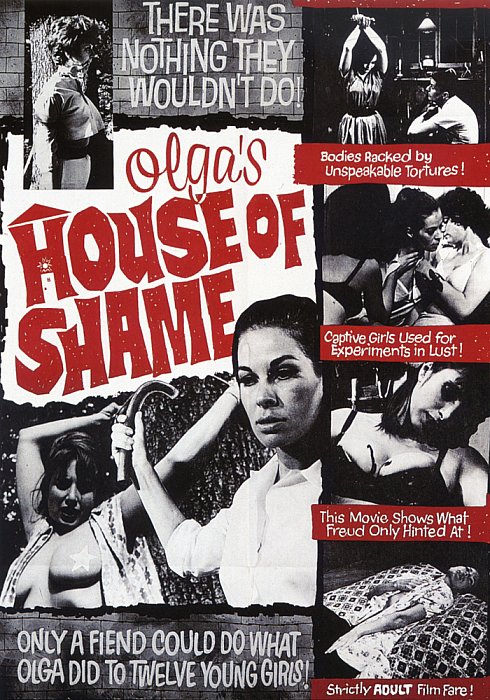 They don't make 'em like this anymore... Come to think of it, they seldom made 'em like this. Yes, boys and girls, this is the third in the infamous "Olga" series (following White Slaves of Chinatown and Olga's Girls) which, once again, gave male audiences the sheer unadulterated joy of seeing beautiful women getting punished. While the early nudies where all sunshine and sweetness, roughies like this tapped in to a growing frustration among lonely psychos who sat in the dark watching the unobtainable. Somehow, like a perverse public service, Olga brightened their life.

Olga's House of Shame has moved from Chinatown to a deserted mill in upstate New York. There, with the help of her malignant brother, Nick (W.B. PARKER), and numerous semi-clad gals in push-up bras, Olga (the incredible AUDREY CAMPBELL) controls a crime syndicate involving narcotics, prostitution, and jewel smuggling.

After numerous beatings, one of Olga's victims, the sweet-faced Elaine (ALICE DAVIS who also starred with Campbell and Parker in Joe Sarno's Sin in the Suburbs), eventually gives in, becomes Olga's "protege," and helps Olga with the torturing. "She looked as if she handled a bullwhip all her life," sighs Olga. Alice also gets it on with creepy Nick... sort of. She makes Nick get on his knees and beg for her. Then she slaps him across the face. Sick, sick, sick. Easily the best in the series and, thankfully, there isn't a politically correct moment in the whole damn thing. Ms. Campbell abandoned the series after this, leaving Miss Davis and Mr. Parker to carry on without her in Madame Olga's Massage Parlor. A fifth Olga, Olga's Dance Hall Girls took the series in a strange new direction. For maximum effect, watch this while shackled. From the 35mm breasts & bondage negative.

But what the film is really about, of course, is scene after scene of women being tortured, whipped, beaten, and tortured. Stacey has a red-hot soldering iron stuck into her cleavage. Poor Paula is scrubbed with a wire brush. Christine has her fingers shredded. Jenny receives a bloody nipple. Insolent Alice's face is beaten to a pulp. Holly is juiced in an electric chair (that reduces its victims "to the moronic stages of life"), and naughy Nadja is given "horse discipline." Or, as the narrator puts it, "Olga felt great excitement in tormenting her victims." No kiddin.'

From the 35mm breasts & bondage negative.