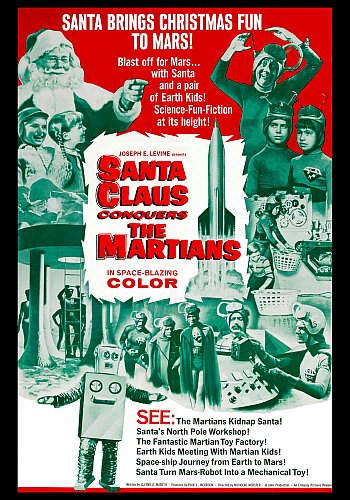 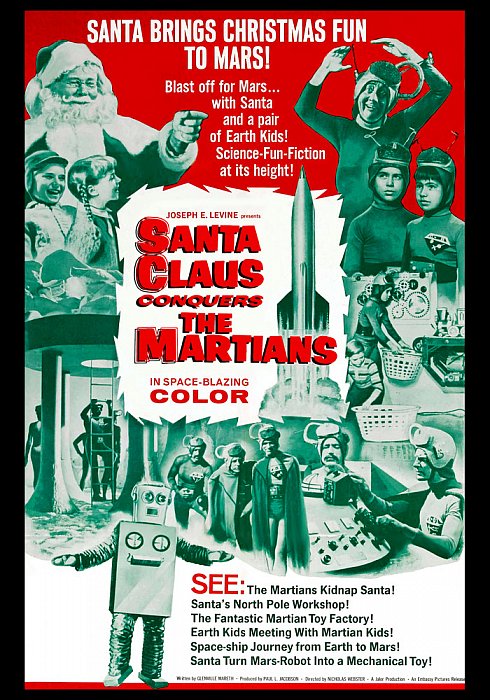 Santa Claus Conquers the Martians is a 1964 science fiction comedy film that regularly appears on lists of the worst films ever made. It is regularly featured in the "bottom 100" list on the Internet Movie Database, and was featured in an episode of the 1986 syndicated series, the Canned Film Festival. It was directed by Nicholas Webster, and it stars John Call as Santa Claus. It also includes an 8-year-old Pia Zadora playing the role of one of the Martian children and also marks the first documented appearance of Mrs. Claus in a motion picture (Doris Rich plays the role), coming three weeks before the TV special Rudolph the Red-Nosed Reindeer also featured the character. The film took on newfound fame in the 1990s after being featured on an episode of the comedy series Mystery Science Theater 3000.

Martian children have become unhappy watching Earth television programs showing Christmas cheer among humans.  The wise old Martian Chochem tells the adults that Mars needs Santa Claus to bring fun and joy to their children.  A group of Martians arrives at the North Pole and kidnaps Santa, but the angry Martian Voldar wants to get rid of him instead.  With the help of two Earth children and the clumsy Martian Dropo, Santa defeats Voldar and brings happiness to Mars!