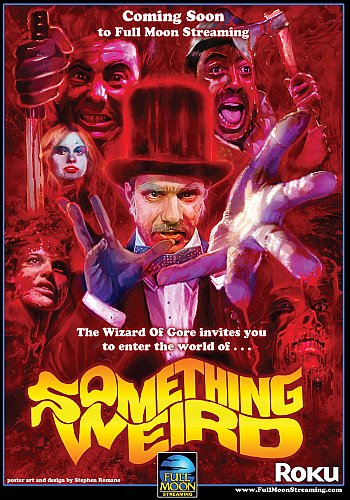 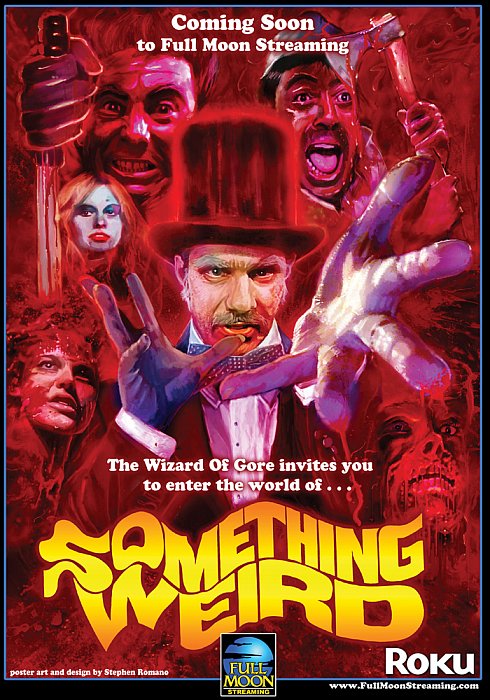 SOMETHING WEIRD is coming to FULL MOON STREAMING!

Full Moon is thrilled to announce the latest addition to the FullMoonStreaming.com roster: an untamed collection of classic cult, horror and exploitation movies culled from the legendary SOMETHING WEIRD library!

The brainchild of late exploitation film curator and weird cinema enthusiast Mike Vraney (who tragically lost his battle with lung cancer earlier this year), SOMETHING WEIRD is widely recognized as the premiere imprint for awesomely lurid, cult cinema. The company has thousands of bizarre and wonderful motion pictures under their umbrella, representing every single strain of strangeness from greasy, hard and soft-core erotica to tassel-twirling burlesque; from European gladiator epics to gory horror gems; from druggie freak out potboilers and beyond. Simply put, in the annals of exploitation film culture, SOMETHING WEIRD stands alone.

Full Moon is no stranger to oddball film culture either and the licensing of key titles from the staggering SOMETHING WEIRD library to our FullMoonStreaming.com channel is a match made in sticky celluloid heaven.

“I’ve made more than my share of crazy movies,” says iconic film producer and Full Moon Features president Charles Band, “but there’s nothing quite like the films that Mike Vraney lovingly assembled over the years with SOMETHING WEIRD. The level of care and passion that went into his reverent presentations of stuff that would otherwise be relegated to obscurity is to be celebrated. By partnering with SOMETHING WEIRD, we’re honoring Mike by bringing our FullMoonStreaming.com subscribers a window into his weird world and it’s something I’m very excited about.”

Artist Lisa Petrucci, Vraney’s wife and surviving SOMETHING WEIRD owner and operator, had this to say about the FullMoonStreaming.com partnership.

"The folks at SOMETHING WEIRD are thrilled to be entering this new venture,” Petrucci, a noted visual artist in her own right, says.

“The idea of exposing our unique brand of exploitation and horror to their film fans is an exciting prospect. Montag the Magnificent (THE WIZARD OF GORE) and Fuad Ramses (BLOOD FEAST) will feel right at home with the other gorehounds in the Full Moon family. I'd like to think that our beloved founder, Mike Vraney, would highly approve of this collaboration!"

Over the next several months, FullMoonStreaming.com will be slowly rolling out dozens of amazing SOMETHING WEIRD titles and to kick-off the party, we’re blasting off with a selection of 10 amazing movies that will blow your mind. Every week a new title will appear.

The inaugural FullMoonStreaming/SOMETHING WEIRD titles unspooling over the next two months are:

Legendary sleaze merchant David F. Friedman cashes in on the druggie flicks like Roger Corman’s THE TRIP and jams in tons of female nudity, violence and general psychedelic insanity. You don’t have to be high to groove on this gem…but it helps!

Lewis’ Florida-lensed hack-em up sees a mad matriarch dispatch her brain addled son to kill and scalp as many women as he can muster, using their bloody hair for mama’s wig shop. Like SWEENY TODD for the mentally ill!

Ultra controversial “Nazisploitation” gem that predated such celebrated nasties as THE NIGHT PORTER and ILSA SHE WOLF OF THE SS, this one is jam packed with politically incorrect depravity that has caused it no end of censorial antagonism.

The crown jewel of the sadistic “Olga” films, this sleaze epic sees rough n’ tumble madame Olga (Audrey Campbell) fleeing with her girls to an abandoned ore mine and opening up a new house of degradation and carnal cruelty.

A favorite of BASKET CASE icon Frank Henenlotter, SATAN’S CHILDREN is a shot-in-Florida cheapie that has to be seen to believed. Tawdry, homophobic and yet homoerotic at the same time, this one is weird, mean, violent and one of the best party movies you’ll ever see.

The inimitable H.G. Lewis followed up the Drive-In success of BLOOD FEAST with this southern-fried shocker, a film that dials down the explicit gore and amps up filmmaking craft resulting in a fun, violent and even eerie horror classic.

H.G. Lewis migrates his unique blend of sleaze into the heart of the 1970’s with this blend of stripper-riddled bump n’ grind gorefest and skid row detective thriller.

Lewis’ crown jewel, his masterpiece of Grand Guignol that examines the stage antics of the malevolent magician Montag, an illusionist whose violent gags really make you gag. Almost existential at times, this one has to be seen to believed. Bring your barf bags!

SOMETHING WEIRD. Yet another reason to subscribe now to the best online movie theatre around: FullMoonStreaming.com. It’s like NETFLIX for LUNAtics!