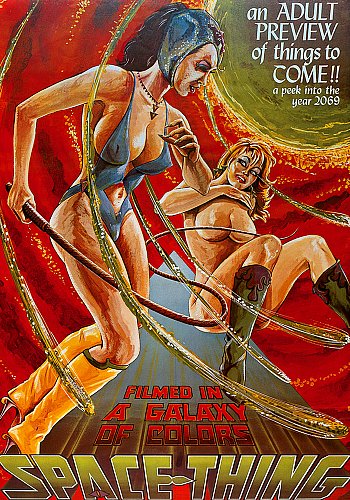 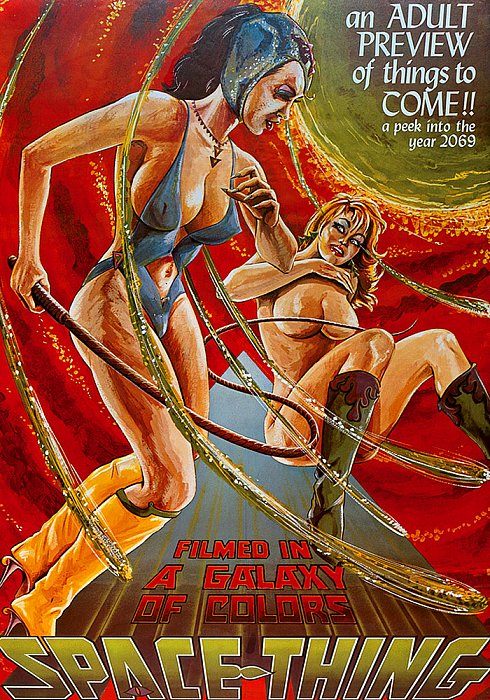 It’s Buck Rogers for adults as Col. James Granilla (Steven Vincent), an alien in human disguise, visits the flying saucer of Captain Mother, and her all-girl crew in the year 2060. But because Granilla is a "Planetarian" and all the lovely space nymphs are "Terranians," he seeks to learn all about their "intimate ways."

Though Captain Mother, a sadistic whip wielding lesbian, frowns on her gals making it with men, everyone wants to get it on with Granilla. When they land on an asteroid (where they need neither oxygen nor clothes), Granilla and the girls share some good old interplanetary passion. Finding himself in the enviable position of ship stud but homesick for his alien wife, Granilla decides to end all the romance with a micro atomic bomb...

Full of sexy gals and unspecial effects, SPACE-THING is a hilarious sci-fi skinflick from producer David F. Friedman Trader Hornee. It’s like Plan 9 in the nude!

According to the IMDB Producer,  David F. Friedman didn't want the actresses to become known by name, because if they became known they would charge him more to appear in his films. Therefore, all the actresses' credited names are false."