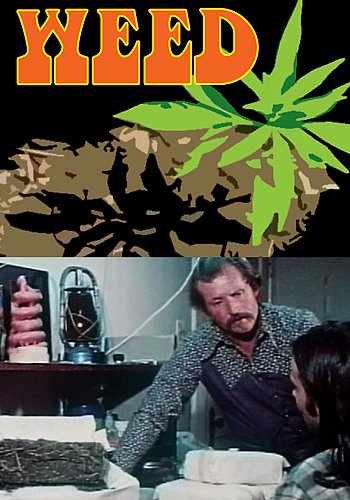 In 1971, President Nixon created the National Commission on Marijuana and Drug Abuse to debate “The Great American Grass Problem” and decide whether marijuana should be legalized. In response, adult filmmaker ALEX de RENZY -- who exploded on the scene with the landmark porno Pornography in Denmark (aka Censorship in Denmark) -- countered with Weed: “It’s not that we don’t trust this distinguished group of men, but there’s a lot more to the grass story. So, as a public service, just in case the President’s Commission might miss something, we thought we’d take our cameras outside of the Federal Court building to talk to the people and check out some of the numerous rumors about Killer Weed!” Doing double-duty as the onscreen interviewer, pony-tailed de Renzy not only goes “outside the Federal Court building,” but travels around the world in search of True Marijuana Facts.

The only non-porno directed by de Renzy -- whose most notorious film may arguably be Long Jeanne Silver -- Weed was even officially rated PG by the MPAA when it was theatrically released by Sherpix in 1972. (One guy, a law professor named JOHN KAPLAN who looks and sounds like Woody Allen, finishes his interview by asking de Renzy where the girls are.) Ambitious, balanced, and well-researched, Weed is not the glib pro-pot propaganda one might expect but, instead, an intelligent discussion of a subject still in debate, as well as an accurate reflection of the turbulent Vietnam-era early 1970’s. Perhaps most surprising -- since it’s clear which side of the debate de Renzy stands -- is that he never once makes the Feds look foolish. No trick questions, no staged gimmicks, no artificial skewering -- nothing but the facts, ma’am, just the facts. In fact, Weed is such a good piece of work that we wish de Renzy had made more like it instead of things like Anal Ecstacy, Gang Bang Face Bath, and Malibu Butt Sluts. And remember, kids:“This whole marijuana thing is degrading to human potential!” From a 35mm pot-o-plenty print. -- Frank Henenlotter